In Its Nuclear Race With India, Pakistan Catches Up

The nuclear race between India and Pakistan is intensifying, thanks in large part to Islamabad’s fear that its military is starting to lag behind New Delhi’s. Over the past decade, Pakistan has become alarmed by the widening gap between its ability to wage conventional war and India’s. Pakistan has turned to its nuclear inventory to level the playing field.

But in doing so, Islamabad has spurred its nuclear competition with New Delhi forward even faster, a rivalry that culminated in Pakistan’s Jan. 9 test-fire of the Babur-3 submarine-launched cruise missile. The test of the sea-based nuclear-capable weapon was the first of its kind in Pakistan, underscoring the country’s investment in mitigating the threat looming on its eastern border. But as Islamabad takes steps to bolster its nuclear deterrent, New Delhi will almost certainly follow suit, each state engaging in a dangerous contest to stay one step ahead of the other.

Unable to match India’s massive military expenditures, Pakistan has taken an asymmetric approach to compensate for its comparative weakness: building up its nuclear arsenal. In fact, Islamabad has already begun to design and develop tactical nuclear weapons that could someday be deployed against Indian troops on the battlefield. Now, Pakistan is searching for the second-strike capability that the Babur-3 might provide. With a reported range of 450 kilometers (280 miles), the newest cruise missile could reach most of India’s major cities, though much of the country’s interior — including the capital of New Delhi — would still be out of range.

Pakistan has its reasons for pursuing these capabilities. For one, India is ramping up its investment in anti-ballistic missile defense systems in response to recent advances in the field by Pakistan and China. This, in turn, has prompted Pakistan to shift its attention to producing cruise missiles as an alternative delivery method to ballistic missiles.

India has also begun to develop its own sea-based nuclear deterrent. Based primarily on submarine-launched ballistic missiles, this deterrent would make India’s second-strike measures far more credible, pressuring Pakistan to respond in kind by boosting its second-strike capabilities to better discourage a nuclear attack. This objective has become all the more important to Islamabad in recent years, since its introduction of tactical nuclear weapons has lowered the threshold for the use of nuclear weapons in the region.

Pakistan’s own progress in nuclear weapons is part of the reason India has chosen to modernize its nuclear arsenal. But New Delhi is also becoming concerned by China’s attempts to speed up its nuclear program. The fact that India has to account not only for Pakistan’s weaponry but also for China’s will complicate any efforts to negotiate an arms control deal between New Delhi and Islamabad. As a result, India and Pakistan will continue down their circular path of nuclear buildups and deterrence.

Part of a Dangerous Pattern

Still, creating a plausible sea-based second-strike threat requires a submarine fleet that can fire missiles. As of now Pakistan has only five of these vessels, three of which could be considered fairly modern. Nevertheless, Islamabad plans to dramatically expand its submarine fleet: In 2015, it struck a deal with Beijing to buy eight submarines similar to the Yuan-class model. Pakistan is also in the process of moving its main submarine base to Ormara from Karachi, which is more vulnerable to attack than the new location because of its proximity to the Indian border. 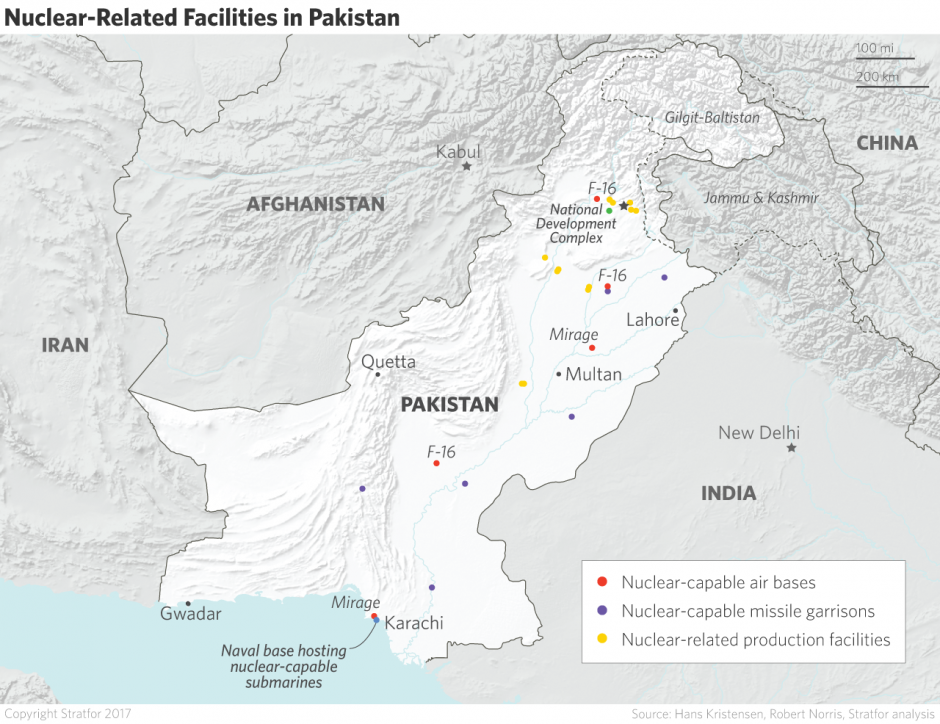 But Pakistan’s reliance on diesel-electric submarines, rather than dedicated nuclear ballistic missile counterparts, comes with significant risks. For example, Pakistani submarines carrying nuclear weapons could come under attack from Indian anti-submarine forces that are unable to distinguish the vessels based on their mission. This could lead Pakistani commanders, who may think the attack is part of an Indian effort to neutralize Islamabad’s sea-based nuclear force, to fire their nuclear missiles during what might otherwise be a conventional conflict.

This links directly to a second danger: the security of Pakistan’s nuclear arsenal. Because submarines’ nuclear-tipped cruise missiles must be ready to launch before they leave port, an enormous amount of responsibility and power is placed on the shoulders of the officers piloting the vessels. Untrustworthy commanders or breakdowns in the chain of command could considerably raise the risk of the unsanctioned use of nuclear weapons.

When all is said and done, Pakistan’s decision to rely on nuclear weapons as a means of warding off attack from a more powerful India has increased the chance of nuclear warfare breaking out in South Asia. Though Islamabad’s quest for a sea-based nuclear deterrent is hardly surprising, it is a conspicuous example of an alarming pattern of posturing between two nuclear powers that have a long and volatile history of hostility toward each other.

Previous How justifiable is the World Bank’s forecast of a speedy recovery in the Indian economy?
Next Solid waste management