Are India and Pakistan set for water wars?

India is stepping up efforts to maximise its water use from the western rivers of the Indus basin, senior officials have told the BBC.

The move would involve building huge storage facilities and canals.

The three rivers flow through Indian-administered Kashmir but most of the water is allotted to Pakistan under an international treaty.

Experts say Delhi is using the water issue to put pressure on Pakistan in the dispute over Kashmir.

Relations have deteriorated since a deadly militant attack on an Indian base in September. Pakistan denies any link to the attack.

Indian Prime Minister Narendra Modi has said a government taskforce is finalising details of the water project, which he has made a priority.

“The ball has started rolling and we will see some results soon, most of them will be about building new storages in the basin,” one top official said on condition of anonymity.

Another senior official said: “We are quite familiar with the terrain as we have already built a number of structures there.

But he added: “We are talking about few years here.”

How much water is at stake?

India wants to “maximise” its use of water from the Indus, Chenab and Jhelum rivers. Millions of people in both countries depend on water in the rivers.

An official with India’s water resources ministry insisted that this action would be “well within” the terms of the Indus Water Treaty (IWT).

India began reviewing the treaty after the militant attack in Indian-administered Kashmir in September in which 19 soldiers were killed.

Delhi accused Islamabad of being behind the attack and relations have plummeted, leading to a rise in cross-border tensions.

The IWT was signed in 1960 and allocated the three eastern rivers – the Ravi, Beas and Sutlej – of the Indus basin to India, while 80% of the three western ones – the Indus, Jhelum and Chenab – was allotted to Pakistan.

India says it has not fully utilised the 20% of water given to it in the three western rivers. Pakistan disputes this.

Officials in Delhi said the IWT allows India to irrigate 1.4 million acres of land using water from those rivers.

But they say only 800,000 acres are irrigated at present.

They added that the building of hydropower projects would also be accelerated.

India currently generates around 3,000MW of hydroelectricity from the western rivers, but the Indus basin is said to have a potential of nearly 19,000 MW.

How safe is the water treaty? 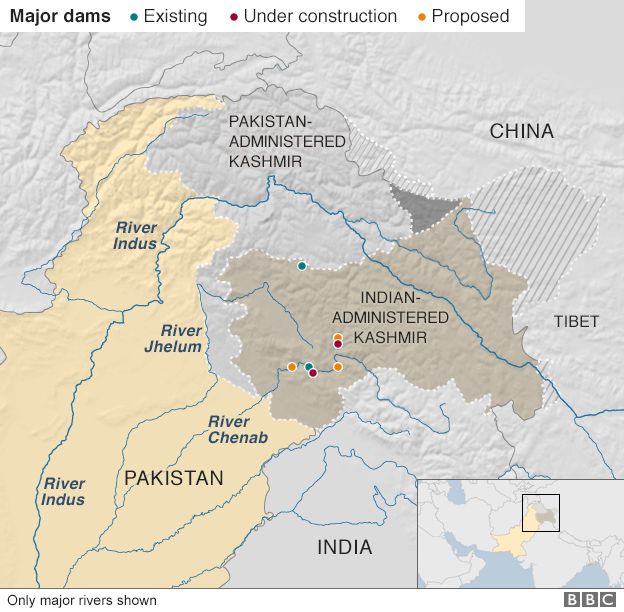 Speaking in an open debate of the United Nations Security Council on “water, peace and security” last month, Pakistan’s ambassador to the UN, Maleeha Lodhi, denounced any use of water as an “instrument of coercion and war”.

“The IWT is equally a good case study of what could go wrong if such agreements are not honoured or threatened by one of the state parties to be abrogated altogether.”

Water experts say the treaty seems to have at least survived because India is not talking about withdrawing from it.

But, they believe, maximising use of water from the western rivers in the Indus basin can still fuel tensions.

Islamabad is already unhappy with some of India’s existing water projects.

It has asked the World Bank, which brokered the signing of the treaty between the two countries, for a court of arbitration to consider two Indian hydropower projects in the Indus basin.

India has objected to this move, prompting the bank to pause the dispute process while it tries to persuade the two countries to resolve their disagreements, fearing that otherwise the treaty itself could be in peril.

In 1987, Delhi suspended the Tulbul navigation project on the Jhelum river after Pakistan objected to it.

But sources within India’s Water Resources Ministry say this project could now be revived.

“The decision to review the suspension signalled the Modi government’s intent to revive it irrespective of Pakistan’s protests,” the Times of India newspaper wrote.

“As an implication, India gets to control Jhelum water, impact Pakistan’s agriculture.”
What else could India do?

Some experts say India could also demand a review of the IWT.

“The review can be used to demand more rights over the western rivers,” says Himanshu Thakkar, a regional water resources expert with South Asian Network on Dams, Rivers and People.

Some water resources analysts believe Delhi will also have to be mindful of China before making any major move.

In September, Tibet blocked a tributary of the Yarlung Zangbo river (known as the Bramhaputra in India) as part of its most expensive hydro project, Chinese state-run news agency Xinhua reported.

The news came just when Indian media were suggesting that Delhi could pull out of the IWT.

“We need to remember that China is an upper riparian country in Indus and Bramhaputra basins and it is also Pakistan’s closest ally,” said Mr Thakkar.

Many experts agree that completing such huge and complex infrastructure projects may not be as swift as some Indian officials suggest.

Previous Russia, Turkey and an Assassination
Next A flawed anti-terrorism law